I just wanted to share with all of you a little side project I'm delving into. In my home town, Brownsville, PA, we have had many firsts. We had the first toll road in the United States, the National Road (Route 40), we had the first cast iron bridge, the Dunlap Creek Bridge, we have the oldest market district west of the Appalachia Mountains, we had the first house built with wooden shingles west of those mountains. We also had another first, one that stands in the back of the minds when we think of the golden age of transportation, especially river transportation. I'm thinking of the steamboat. No we didn't build the first steamboat. Instead we made it better.

Henry Shreve (for which Shreveport Louisiana is named) lived in Brownsville and a man by the name of Daniel French. They made the steamboat better, by tailoring the vessel to the inland water ways and foregoing the sea going designs of the 18th century. So where lies the first? We built the first steamboat that traveled from the Monongahela Valley, up to Pittsburgh (Monongahela River flows north) and down the Ohio River to the Mississippi River to New Orleans and return under its own power in 1814. The boat was named Enterprise, and this new technology revolutionized the way people and goods were transported.

The side quest of mine just happened to have taken me to the front door of the house where these men first created the Monongahela Steamboat Company along with Elisha D. Hunt, Robert Rodgers, and Elijah Clark. I have found the birth place of this enterprise, called the Bridgeport Manufacturing Company's Cotton Factory. And it is scheduled for demolition. 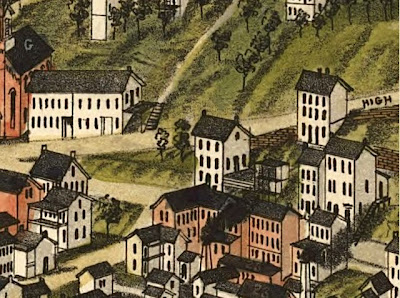 The building is the white structure between the fork in the roads with the three trees in the front.


(From 1883 Birds Eye View map of Brownsville- Library of Congress)

Posted by Archaeology Dude at 10:17 PM