It's been a while since I've posted on here but I now have a new update! I was busy on a Phase I survey in Greene County, Pennsylvania on some game lands for the building of a new wetland area. When a state agency such as Penndot, Game Commission, or other state funded agency has to destroy a wetland, another one has to be constructed. So as an archaeologist, my crew and I were contracted to see what types of cultural resources (artifacts) might be hidden beneath the floodplain soils.

In order to accomplish this, we used a series of interesting people and gadgets to get the job done. One of these specialists, a GEOMORPHOLOGIST, or PEDOLOGIST, came out to our site to have a look at the many layers of soil that were deposited during the past several thousand years of flooding. These scientists study the the composition, age, and origin of soils. Plus they can tell us if a soil layer is young enough to have artifacts or too old before humans were on the North American continent.
The second type of specialist we used was a ZOOARCHAEOLOGIST. A zooarchaeologist study the remains from animals that are found on archaeological sites. While completing our Phase I survey, we came across teeth from a bovid type animal (cow, bison, ox) buried at 90cm. These teeth needed to be identified, so we sent them to a zooarchaeological specialist who came back with the disappointing conclusion that they were in fact from a cow! The cow must have died on the banks of the nearby creek and its body silted in during subsequent flood events.

One cool piece of equipment that we played with out there was a ground penetrating radar or GRP for short. This machine looks like a push lawn mower that is pushed or pulled over the ground in strait tight rows. The radar moved through the soil layers and dependent on what those layers are made from, or if they have been disturbed by human activity, the waves from the radio take more or less time to be reflected back to the machine. This produces a wavy pattern on the readout display that for someone that is trained, can see the outline of a grave or ditch as compared to just regular undisturbed soil.

Well I hope you had an informative read, I promise to update more regularly now that I'm out of the field so check back for more! 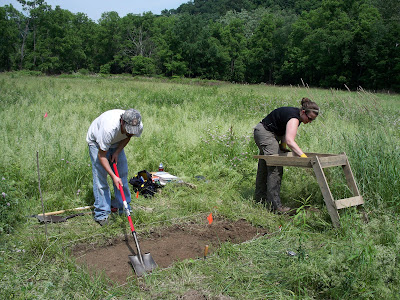 (In this photo: Dave Kroskie starting a 1X2 and Susan Balint [my girlfriend] screening for artifacts)

Posted by Archaeology Dude at 3:45 PM